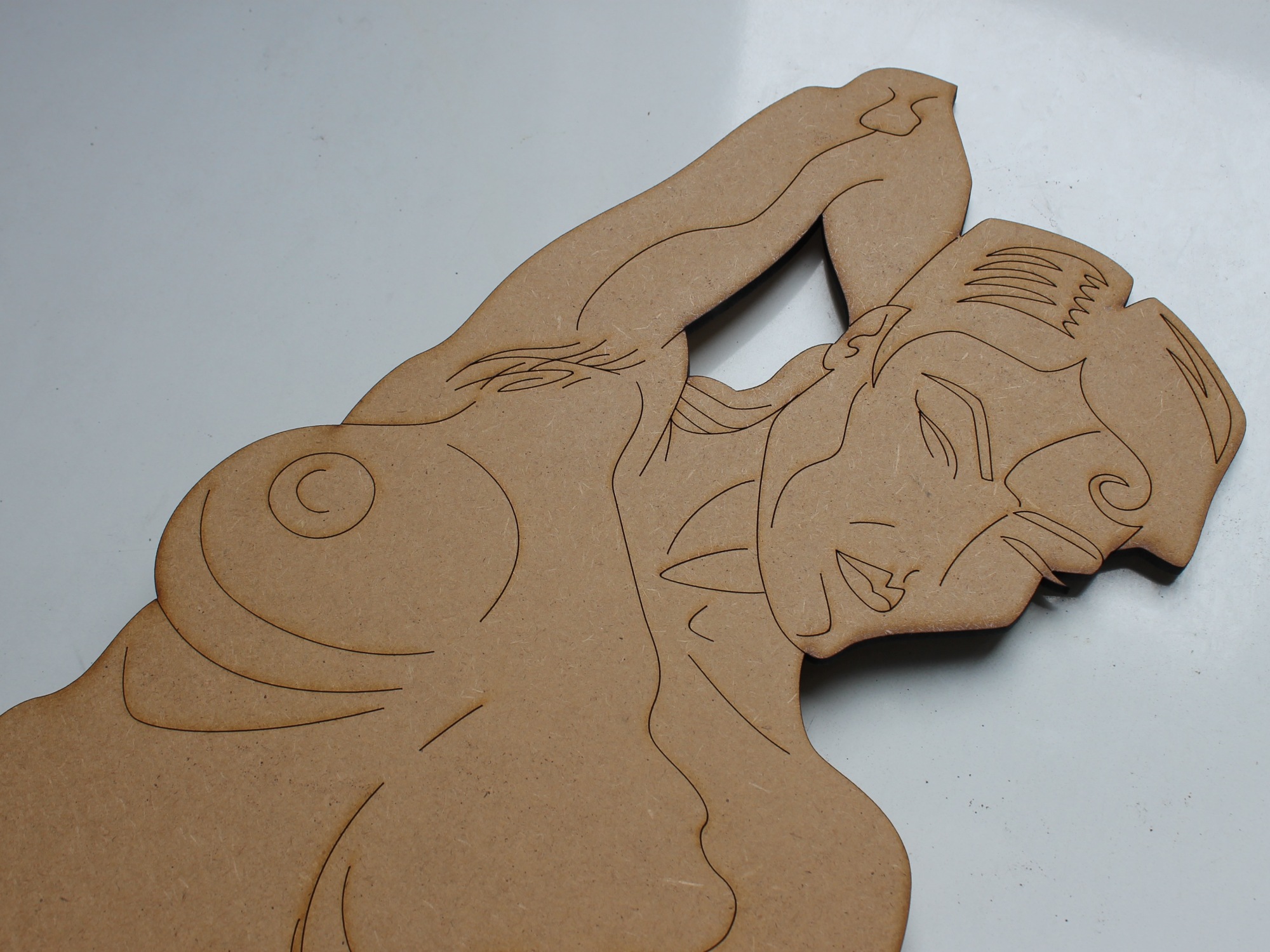 Cometh May, cometh the annual SCAC exhibition. And, in the run up to it, the tortuous decision as to which drawings or paintings to enter. All members are allowed to exhibit up to three pieces each, the selection of which can be quite difficult given an entire year’s output to choose from. A ruthless critical eye and a heart of stone are essential.

However, this year, I decided that rather than simply frame up three of my more acceptable life-drawings from the accumulated pile, I’d like to produce something especially for the exhibition. Just occasionally, one of these relatively quick, 10-minute sketches will have some quality – the pose, the lighting, a particular line or mark – that suggests potential for further development. The obvious next level would be a painting based on the drawing, but for some reason I wasn’t attracted to this idea, and wanted to come up with a more original concept.

It was while pondering on this that I remembered a personal project from about five years ago, when on a whim, I decided to produce a cut-out version of a cartoon hula-girl I’d drawn. Don’t ask me why. It was painted, in a combination of acrylics and matt emulsion (from a collection of Homebase match-pots!), on 3mm MDF board. One of the hardest parts was cutting around the outline with my cheap electric jig-saw. You can see what a crude job I made of the cut on the image below, shown next to the original vector illustration. Notice how I managed to completely saw off one of the leaves on the lower right; what a craftsman.

However, I enjoyed the exercise enormously – especially the hands-on, analogue nature of it – and revived the process a few months later for Lynn’s birthday. I produced a pastiche Botticelli card design (Parkin’s Venus, as it’s known in these parts), and set about replicating it at about two-thirds life size by way of a present. What woman wouldn’t be absolutely… well, horrified, probably. But that wasn’t going to stop me.

Here are a few ‘process’ images. I deliberately kept the cut outline simpler this time, following the previous experience. The image was printed out in enlarged sections, taped together, and traced onto the primed board as shown:

Note the (thankfully) unembarrassable birthday girl moments after unwrapping the gift in front of a room-full of friends. The image now adorns our bedroom wall. 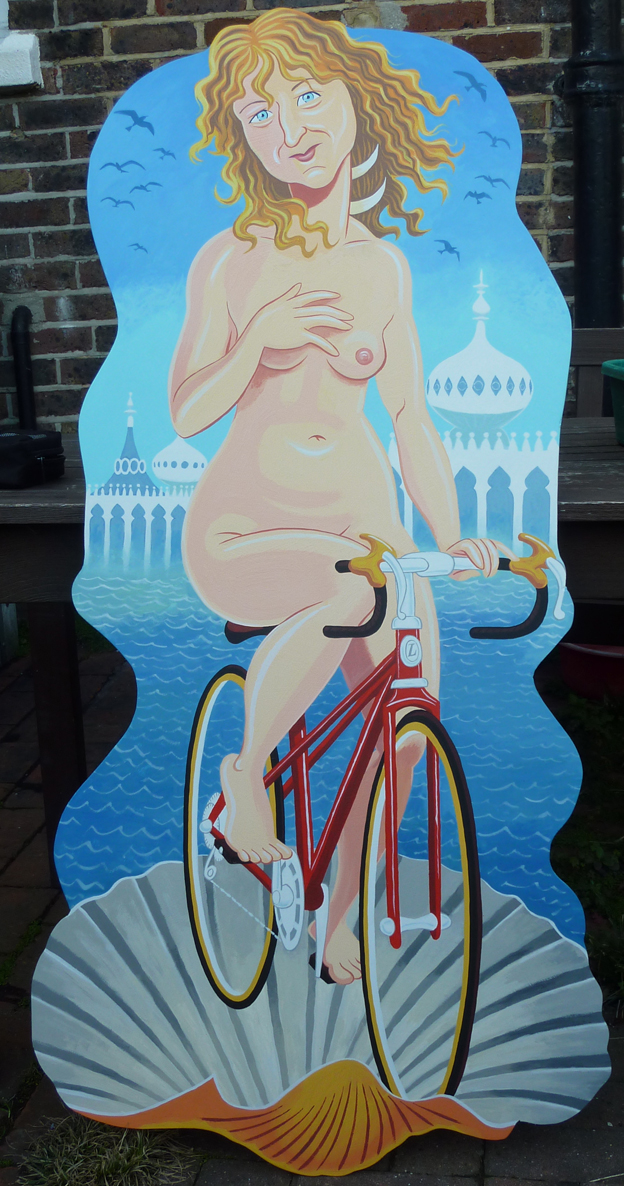 I can’t remember exactly when and where I first started thinking about laser-cutting, but at some point I must have read about it and realised that this was the answer to producing the precise cut-out I’d originally envisaged but had thus far signally failed to achieve. A bit of on-line research soon revealed a few local companies that offered a laser-cutting service; I selected Brighton & Hove Plastics in Portslade, on the basis of proximity. The image I chose for this first tentative foray into the world of laser beams was my Chilli Pickle Restaurant character, ‘Auntie’, lifted directly from the Green Chilli Pickle label. I created a cutting guide in Adobe Illustrator, uploaded it to B & H Plastics as advised on their website, and supplied them with the MDF, which they don’t keep in stock at this size. I remember being thrilled at the accuracy of the cut-out board when I collected it – this was a whole other level to anything possible with a jig-saw. The painting was done in emulsion and acrylics as before, and although it was intended as an experimental piece largely for my own amusement, it now hangs inside the entrance of the Chilli Pickle, welcoming diners to the restaurant.

Fast forward to March this year, and my decision, as you’ll have no doubt guessed from that extended preamble, to attempt something similar for the aforementioned annual SCAC show.

Here are the two images I selected to use as a basis for the new pieces. I was looking for standing poses, which reduced the number of candidate drawings somewhat, and although neither image is by any means wonderful in its own right, each of them had something I felt I could work with. The back view of Jenny, for instance, is unflatteringly wide and the head is too small, but I liked the way the highlights picked out the form. The quick sketch of Kate has all the slapdash lack of finesse that you would expect of a 5-minute study, but her pose, from this face-on viewpoint, has a majestic, classical quality which the drawing, for all its faults, just about manages to capture.

Having selected the drawings to adapt, I opened the scanned images in Sketchbook on the Cintiq and made simplified line-only versions, incorporating a few aesthetic tweaks along the way. The original drawing of Kate stopped short of the feet, so I introduced some Alphonse Mucha-esque drapery to compensate.

Once I was happy with the line drawings, I made a vector copy of each in Illustrator, for use as templates by the laser cutter. The black line denotes the cut-out shape, with the red lines to be etched onto the surface. These were intended to serve as guide-lines at the painting stage; I figured that if they remained visible through the paint, that would be fine. They’d be just another interesting feature.

Off they went to B & H Plastics, along with a couple of sheets of 6mm MDF.

When I picked up the laser-cut boards a few days later, I was tempted to abandon the idea of painting them altogether and simply hang them as they were. They looked amazing. The accuracy of the reproduction from this process is something else, and the laser-cut edge has an undeniably attractive scorched quality. I could have stared at them all day, in fact I think I did.

The laser-cutter can handle fine details such as these without a problem:

Finally, time to get the paints out. My idea was to stick as close to the source material in terms of appearance as possible. My iPad displayed the original drawings next to the drawing board, which I referred to constantly. In keeping with the general experimental nature of the exercise, I used acrylic paints, a medium with which I have had very little previous experience. 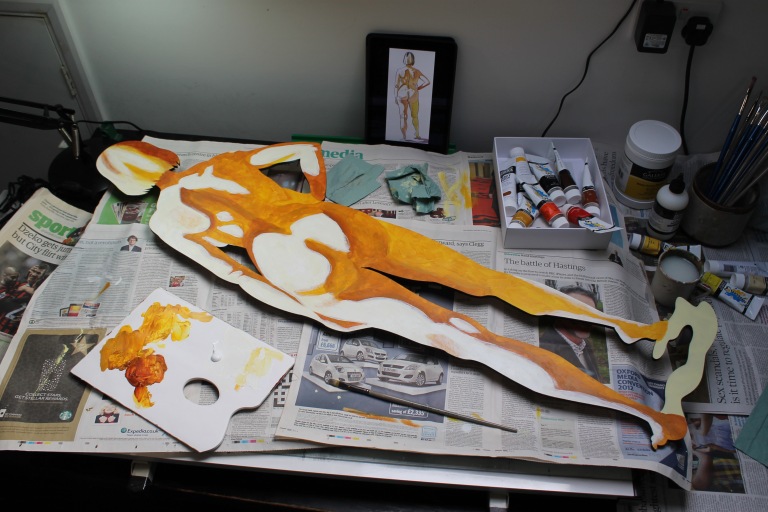 Here’s the finished cut-out painting of Jenny. The still-unprimed figure of Kate awaits attention in the background: 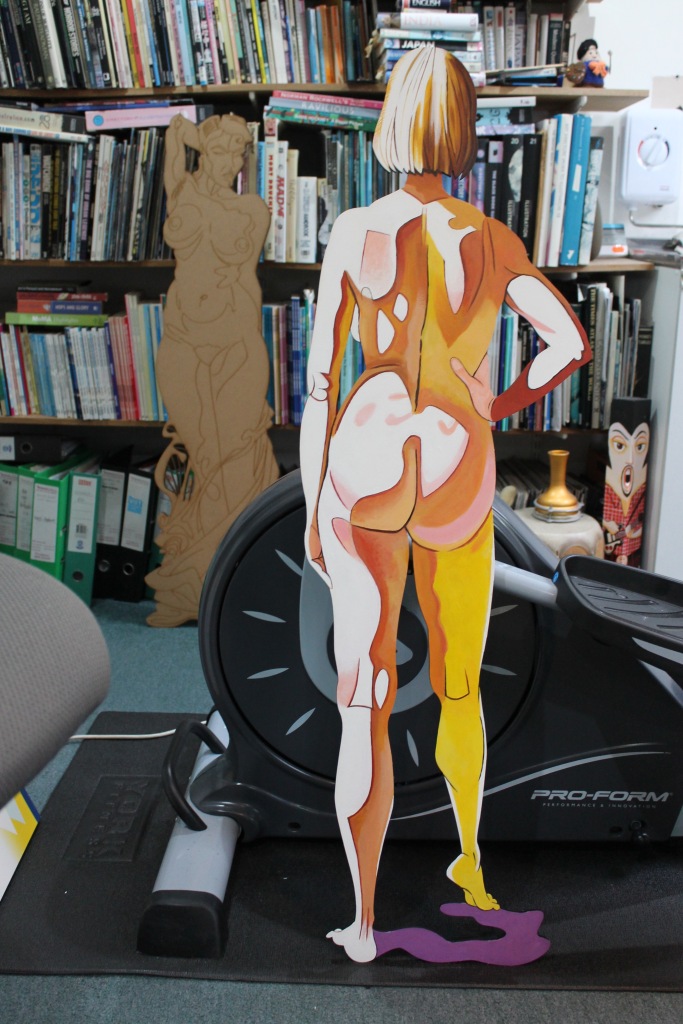 The ‘drapery’ proved way more of a headache than I’d anticipated. The original idea had been a red and blue combination but it quickly became clear that this was going to draw attention away from the figure, which had to remain the focus. In the end, and with the hanging deadline looming, I went for a loosely painted all-blue approach, obliterating most of the original etched guidelines into the bargain.

Here’s the finished version, propped up against our garden shed prior to varnishing:

As luck would have it, on hanging day, Kate herself swung by the club to drop off her own work. Here she is contemplating her MDF doppelgänger; one of the first people to see it, appropriately enough. 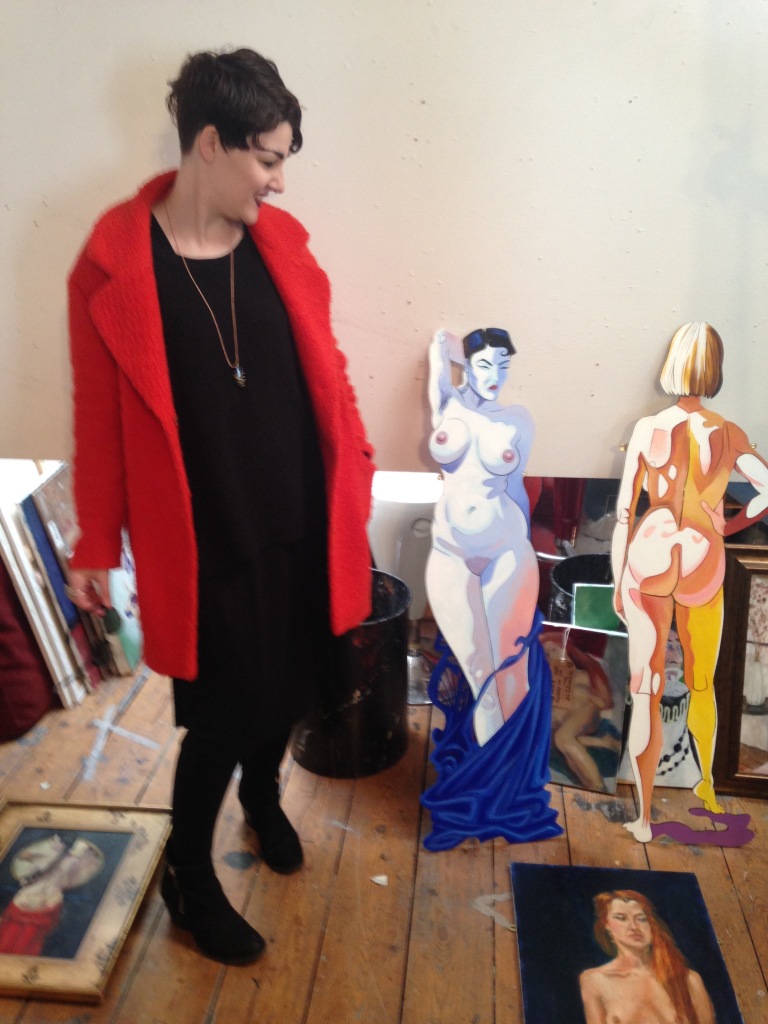 And finally, here they are in situ: 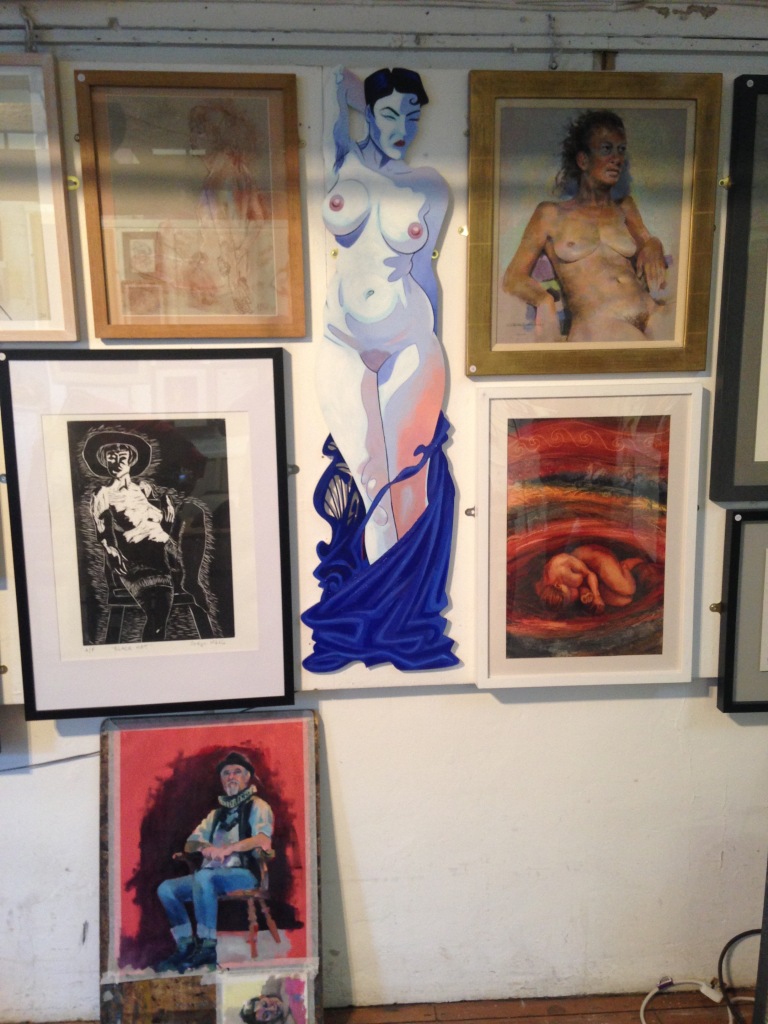 A background colour other than white might have set them off to better effect but that’s just being picky. As experiments go, this one has been a blast. I’ve found the whole procedural journey really interesting: starting with a relatively quick, traditional sketch, making a series of digital interventions, throwing in a bit of high-tech light industry, and ending up with an truly hybrid piece of work. This is territory I’ll certainly be returning to as soon as time allows; I feel like I’ve barely begun to explore the possibilities.

All images ©Geo Parkin. Reproduction of any of the images on this website without permission infringes copyright and is illegal.